The Index Librorum Prohibitorum was a list of banned books by the Roman Catholic church from centuries ago. It included two notable books: Johannes Kepler’s Epitome astronomiae Copernicanae, which was on the index from 1621 to 1835. The second notable book was, in various editions of the index, some translations and editions of the Bible. Now I’m not going to judge them for what they did at that time, however, looking back, it must be an embarrassment. For us, we too have some who want to “ban books.” However, instead of “banning books”, maybe a stronger approach would be to educate people on truth, wisdom and common deviations from the truth. This will help arm the common follower of Christ prevent deception.

To build a foundation, I want to note that in a previous post I gave some steps to deflect brainwashing – including knowing truth and intentionally building a broad background in different works (click here). When one puts undue faith on one or even a small group of men or women for opinions, there is impending disaster. In another post on technology, I noted how to bolster oneself against online deception – knowing truth and understanding good sources (click here). Lastly, I noted in a training post that one needs to disciple oneself, or others with, what I called, inoculation (click here). 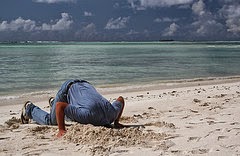 Just as some parents have concerns about diverse perspectives attacking their children, some leaders of Christian fellowships have the same concern — for real reasons. However, just as in my previous post on inoculation, isolation is not the key to growth. It makes one much more vulnerable to deception. Isolation is not the key to purity in teaching, but rather it’s the road to a weak or an absent spiritual immune system. Knowing truth and having wisdom is like having a healthy body and nutritious food. When a healthy body is inoculated the body prepares for the defenses. When arguments do present themselves against truth, one will already have heard and been prepared to succinctly and efficiently counter the arguments — in both one’s mind and verbally if needed.

When I hear about Christian leaders insisting that only limited texts and literature is advised, or that one should not read things outside of a certain gathering, red flags raise and concerns accumulate in my mind. This is for two reasons. Just like in III John, we read of one Diotrephes who loved dominance and control or as it is put “preeminence”, it seems that some in our time may desire the same.

Another is that one will not be prepared for the attacks that are increasing every day, they are coming closer to even the sheltered believer. Many types of literature help give rejoinders against the bad arguments that attack the follower of Christ. After one knows the truth and has a strong mind, one needs to sit down and compare what is being said in society to the truth. This can’t be done if one positions one’s self in a vacuum. In addition, not knowing also hampers ones ability to answer the skeptic.

Why would we allow ourselves to be sidelined by weak arguments when we have good sources and arguments to demonstrate they these fail? Maybe we ourselves will not succumb, but what about our children and grandchildren?

The Bereans, in Acts 17, were praised when they listened and then searched out whether or not the Apostles were speaking truth. It’s not if one will be presented with dubious arguments against their faith, it’s when. The best time to form rejoinders is when one has time to read and think. In this case, the best defense is a good offense, not hunkering down with the “head in the sand”.

What do you think? Can you give any examples when you were prepared the give a defense in your own mind or to another? How did you prepare?

Love Not the World