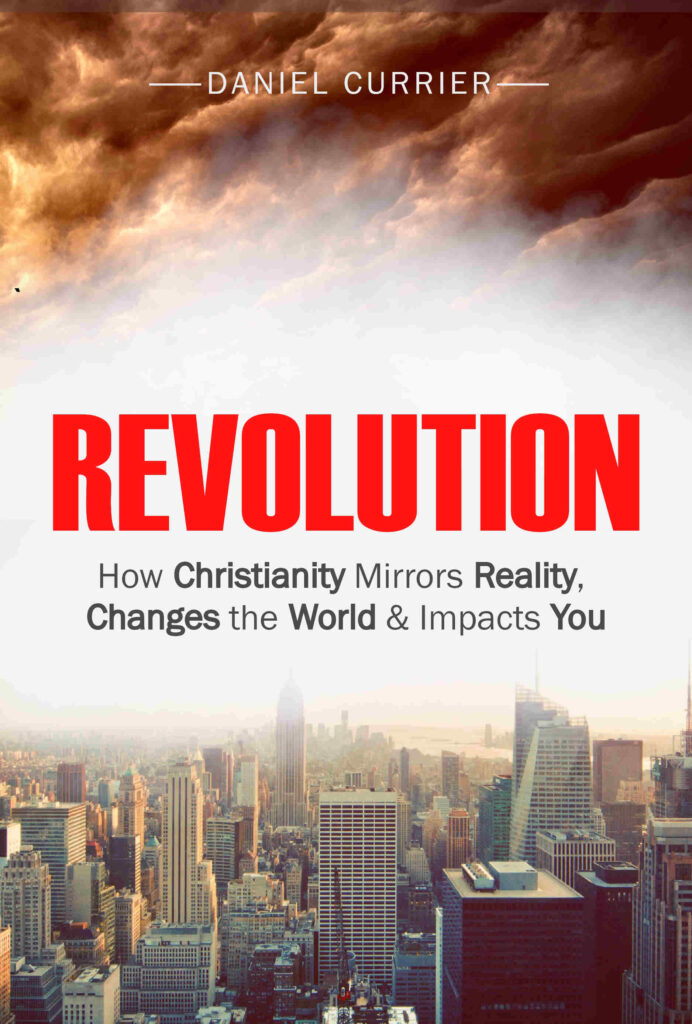 Revolution: How Christianity Mirrors Reality, Changes the World and Impacts You

1. Are science and the Bible at odds?
2. What started the scientific enterprise?
3. Is the Bible fiction because it talks about unicorns?
4. Is our DNA 99% similar to a chimp’s DNA?
5. Which religion matches reality the best?
6. Is evolution or creation correct?
7. Does the Bible teach that Christians should have a blind faith?
8. Did Jesus Christ even exist?
9. Did Jesus really rise from the dead?
10. What does becoming a Christian really mean?

What is this book about?

This book will look into the above topics. We will talk about how different worldviews and religions have different real-world impacts, both good and bad. As we look at Christianity, we will see that it has propelled world progress in tangible ways. It gave rise to science and the free market, and it abolished chattel slavery. The findings of science seem to point to biblical claims about God and nature. Life looks designed as Scriptures teach, not formed from the directionless processes that some assume. Genetically, we are radically disparate from chimps. We will also discuss other things too, such as some strange biblical passages that some view as fiction, but rather are vindicated by evidence. We will see that objective moral stands from the Creator make a better world than subjective moral standards. As Jesus is the central figure of Christianity, we will also learn about some interesting aspects of his birth, life, and death. We will learn how his message has changed people and has changed the world for the better. Lastly, we will see how building a rational Christian faith, each one of us can be the change we want to see, and as a side benefit, we can help change the world for the better.

Who is this book for?

This book is aimed for the average person, not the technical and academic readers (even though they can read this too). This means that most Jr. High and High school students should be able to read the book too. Because it is made for the common person, citations have been kept to the minimum. However, I have a going deeper section after each chapter in case someone wants to research the ideas more.

How Do I get the Book?

You should be able to download your copy of the book at one of the following booksellers sites:

Is there a Paper back version of the book?

Not yet. If you are one of those types of people who would rather purchase the hard copy version, please reach out to us so we know there is interest!

Can I get the book for free?

Yes! If you would like the digital version of the book, feel sign up for the iApologia updates to get your free copy. If you are already a subscriber to iApologia, please reach out and request a digital copy of the book.

In addition, we would be happy if, after you read it, you would write a review on book sellers websites or on your social media or both.

Can I get a sample of the book?

What are the Chapters about?

Chapter 1: The Struggle, the Search, and Civilization

One of the many worldviews today, but maybe the most popular as well, is something that we may be able to call a “religion.” Some have labeled it “Moralistic Therapeutic Deism.” This “religion” takes many Christian ideas and twists or redefines them. However, just because it is popular doesn’t make it true, just like many of the other worldviews that we see in society. Christianity gives a response that is not only solid, but it also matches reality.

There are a number of essential parts of reality and history that are awkward in other worldviews but make sense within a Christian worldview. Atheists may try to wave them away, but these are important items that need to be addressed. I call them “Big Bangs.” They include the cosmological, biological, psychological, informational, immaterial, moral and Christian Big Bangs.

Chapter 3: The Map of Reality

Reality contains numerous paradoxes. Christianity seems to have expected these true but often non-obvious realities. Christianity’s paradoxical worldview helped give rise to Western Civilization and even the scientific revolution.

As we look at the millions and millions of machines found within our cells, it is clear that their design is much better explained with a Creator than directionless evolution. Machine design is perpetually from intelligent agents. Machines also need instructions for their construction. Cells contain such instructions, such as found within the genetic code.

Nature is full of structures, machines and designs that are so well designed that we are constantly trying to mimic them. From a different angle, some of the designs in technology have a very similar design as those found in nature. However, nature wasn’t copied. The designs arose independently of each other. It is rational to conclude that a known source for a design helps us understand an unknown source for a similar design. Designs in technology come from intelligence, so it is rational to conclude that designs in nature also come from intelligence.

Chapter 7: Monkey Me or Unique You?

Many think we are really closely related to chimps. Genetic evidence, however, says otherwise. Genetically, it looks like we were created independently of each other. In addition, humans seem to have been created with special attributes and characteristics that reflect God, affirming the biblical claim that we are created in God’s image.

Chapter 8: What the Ancient of Days Knew

Often Scripture is slammed as being outdated or a fairytale. If God both created humans and inspired the Scriptures, however, we should see them mesh well. First, we find that the biblical way produces the best society. Second, we find that many of the embarrassing passages actually match reality.

Chapter 9: The Maker, Me, and Morality

Some think that we can willy-nilly create our own morality. However, if God created us, not only is He in charge and He owns us, but He knows what’s best for us. He is the one with the “instruction manual” for us. Besides giving us objective moral standards, God’s word also addresses why bad things happen to good people and how we should address the injustices that we see in the world.

Chapter 10: The Homeless Guy Who Changed the World

Some doubt Jesus existed and died on the cross. Both Christian and non-Christian sources, however, give much evidence of His existence, His peculiar attributes and teachings, His death on the cross and His resurrection. Because of His charisma and importance to history, every religion put Jesus in sections of their religion. However, only Christianity has Jesus as the axiomatic figure.

Chapter 11: The Epic God-Man Story that is True

While we celebrate Jesus’ birth at Christmas, His birth was predicted by ancient prophets’ centuries prior to His entrance. The strangest, the most peculiar and the most paradoxical aspect about this charismatic person was His divinity and humanity; He was fully God and fully man!

Chapter 12: The Holy Hero Rises to the Challenge

Jesus taught controversial and radical things, including the description of Himself. He claimed kingship over a heavenly kingdom, He claimed to be the only way to God the Father, and He claimed to be the Son of God. Such claims require evidence; one type He provided was the numerous miracles He performed.

Chapter 13: Murder of the Innocent

Besides His controversial and radical sayings, Jesus was sinless, and He outwitted the contemporary religious leaders; all this made them mad. They were on the constant lookout to trip Him up. Eventually, they captured Him and pressured the Roman state to kill him. As prophesied many years earlier, He suffered the horrific and dreaded death of a criminal slave.

Chapter 14: Across, Lacrosse We Find the Cross

Through the ages, the cross of Jesus has been used to represent many things. The cross beams represent the fact that Jesus is the center of civilization. Jesus suspended between heaven and earth represents His reconciliation of man and God. The cross shows His great love for humanity and the worth of humans. The cross holds us to a high standard. Since a servant is not greater than his master and Jesus the master gave His life freely for others, He expects that we do the same.

Chapter 15: Say No to Zombieism

Chapter 16: The Dead, Dead No More

Humans are fallen; in a way, we are broken and twisted. Think of our condition as drowning in an ocean of sin. This is the bad news. The good news, however, is that there is a way of rescue. Jesus freely reaches His hand out to rescue us to a dry boat. All we have to do is to trust Him for salvation. On the cross, Jesus paid the price for our rescue, took away our sin and reconciled us to God.

The Christian worldview has transformed the world. It brought about the free market, the scientific enterprise, and the abolition of slavery. So, would the world be a better or worse place if everyone became more like Jesus? War, theft, murder, immorality, and hatred would be gone. Now, in this life, this will never happen. However, that doesn’t mean that we can’t still make the world a better place. First, we need to be the change we want to see by being more like Jesus. Second, we need to work hard to impact our family. Together, we can impact our community and our nation, and truly, we can impact our world.