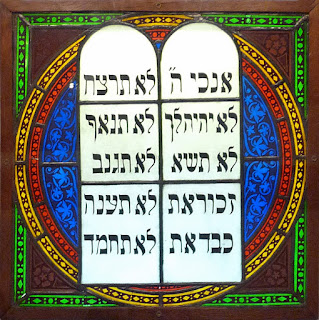 Taken from Arnold Fruchtenbaum’s study at Ariel Ministries, I feel that this is the best argument concerning how we interact with the Ten Commandments in light of Scripture.

This is the third final part of the three part series that addresses the above questions. Please enjoy!

The Jewish Believer Is Under A New Law

The reason there is so much confusion over the relationship of the Law of Moses and the Law of Christ is that the two have many similar commandments, prompting many to conclude that certain sections of the Law have, therefore, been retained. But we have already shown that this cannot be so, and the explanation for the sameness of the commandments is to be found elsewhere.

Let me illustrate this by using an example which you may have also experienced. I received my first driver’s license in the State of California; as long as I drove in California, I was subject to the traffic laws of that state. But two years later, I moved to New York. Once I left California, I ceased to be under California’s traffic laws. The traffic laws of that state were rendered inoperative in my case. Now my driving was subject to a new law – the traffic laws of the State of New York. There were many laws that were different: In California, I was permitted to make a right turn at a red light after stopping and yielding the right-of-way. But in New York this was not permitted. On the other hand, there were many similar laws between the two states, such as the edict to stop at red lights. However, when I stopped for a red light in New York, I did not do so in obedience to the State of California as I once had, but in obedience to the State of New York. Likewise, if I went through a red light without stopping, I was not guilty of breaking California law but New York law. Many laws were similar, but they were, nevertheless, under two distinctly different systems.

For believers, this understanding can resolve many issues – such as women wearing pants, the Sabbath, and tithing. As the commandments concerning these things are based on the Law of Moses, then they have no validity for the New Testament believer. The Law of Christ is now the rule of life for the individual New Testament believer.

The Principle of Freedom

What we are saying is that the believer in Yeshua Hamashiach is free from the necessity of keeping any commandment of the Law of Moses. But it is crucial to note that he is also free to keep parts of the Mosaic Law if he so desires.

The biblical basis for this freedom to keep the Law is evident in the actions of Paul, the greatest exponent of freedom from the Law. His vow in Acts 18:18 is based on Numbers 6:2, 5, 9 and 18. His desire to be in Jerusalem for Pentecost in Acts 20:16 is based on Deuteronomy 16:16. The strongest example is Acts 21:17-26, where we see Paul himself keeping the Law.

So, if a Jewish believer feels the need to refrain from eating pork, for example, he is free to do so. The same is true for all the other commandments. However, there are two dangers that must be avoided by the Messianic Jew who chooses to keep portions of the Law of Moses: One is the belief that one who does so is contributing to his own justification and sanctification. This is false and must be avoided. The second danger is that one may demand or expect others to also keep the Law. This is equally wrong and borders on legalism. The one who exercises his freedom to keep the Law must recognize and respect another’s freedom not to do the same.

What did you think of the final argument? Does this clarification help you understand the old law better? Did you disagree with anything? Why? Feel free to comment below!

Should A Christian Vote?

3 Things You Thought The Bible Says About Christmas, But It Doesn’t.

Is God a Moral Monster? [Video at the end]