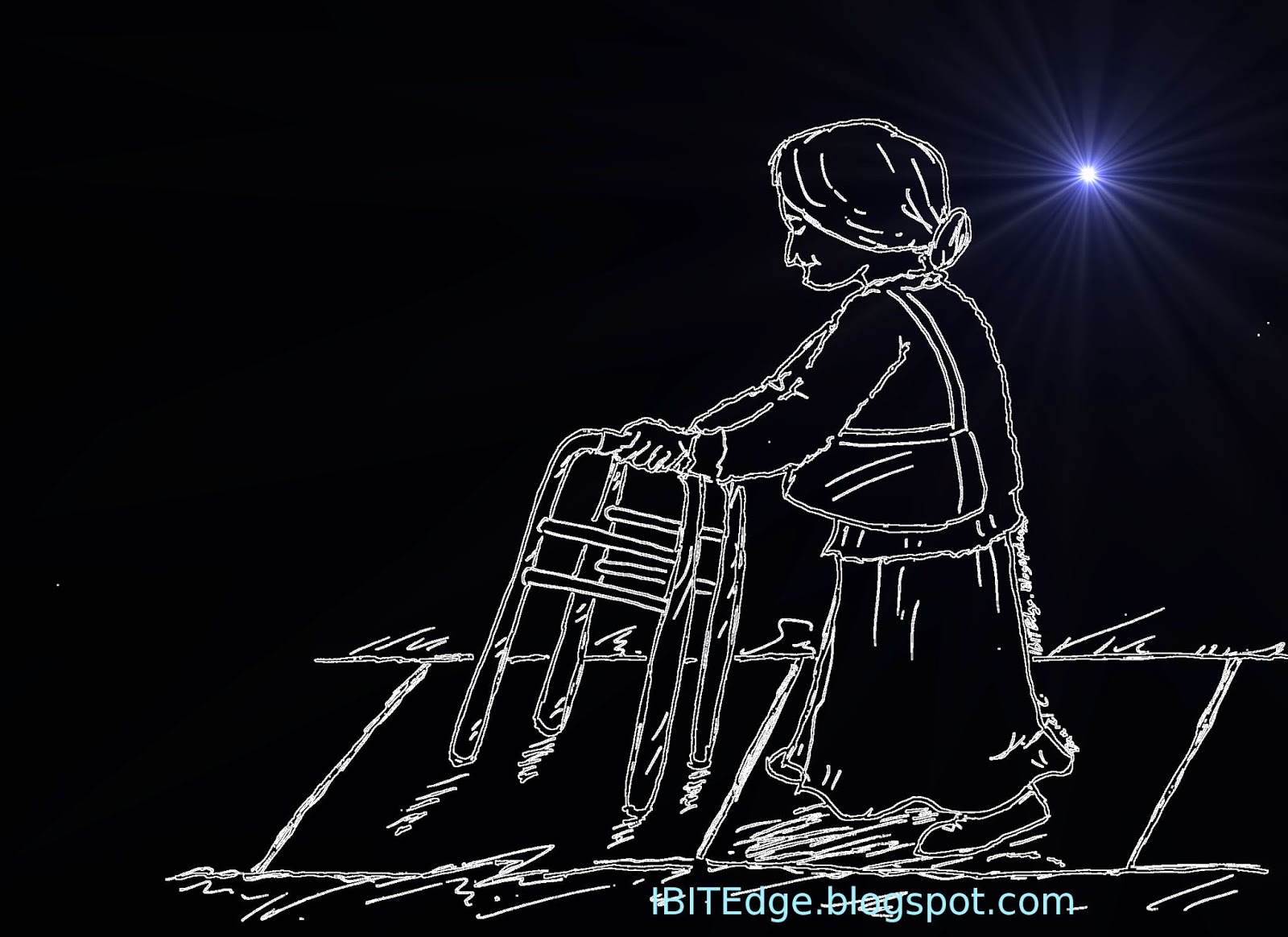 Someone’s grandma is shuffling down the street about to cross that busy road. Being the generous self that you are, you slowly walk next to her, making sure she arrives safe on the other side.

She thanks you and starts into a sob story of her life and her poverty. You are moved with compassion, and that’s when she asks for charity. Reaching down to you wallet, you pull out a five and hand it to her. She says she could use more, so you hand her another five and head off.

You barely take a step down the side walk when she says “I want all you money, please.” You hesitate. Spontaneously she says “hurry, or I’ll shoot you.” Flabbergasted you laugh, not sure if poverty stricken sweet grandma has lost her mind. You smile and say “have a good day” and start moving, as you turn to go, you see her hand slip into her purse and out slides out a cute looking Remington derringer. You don’t think twice, with one smooth move, your hand slips into your pocket pulling out your wallet, emptying the contents into grandmas purse as the business end of the weapon is pointed at you. You say “good day” to sweet old grandma and you vamoose.

Faith, some say faith is blind, maybe so. But I could also say arithmetic is blind, sames goes with information, reason, logic, thinking, and may other things. The concept is unseen.

Faith in God is similar. God never asks us for “blind faith.” Jesus and the biblical writers give much evidence for faith – in other words believing on him or putting our trust in him. Biblical examples where Jesus provided evidences include previous Scriptures, God the Father, the Spirit, John the baptist, his miracles, Jesus himself, prophesy, changed lives, personal testimony, personal experiences and primary sources.

“But what about the infamous doubting Thomas”? one may ask. OK, good question. Let me give the context.

In John 20:11-26 we read the story of Mary Magdaline and the apostles. Only after Mary Magdaline went to the and tomb, met the angles and talked to Christ did she personally tell the disciples what happened. Later, all the disciples, save Thomas, were gathered together when Jesus appeared in the mist of them showing them his hands and side, and spoke to them. The disciples had first hand testimony of speaking to and seeing the resurrected Jesus. Even thought Thomas had all this evidence (besides Jesus own words before his death), Thomas said he wouldn’t believe till he saw and felt the wounds. A number of days later, the disciples, including Thomas, were together. Jesus again appeared. Now picking up on verses 27-29 Jesus says “Then saith he to Thomas, Reach hither thy finger, and behold my hands; and reach hither thy hand, and thrust it into my side: and be not faithless, but believing. And Thomas answered and said unto him, My Lord and my God. Jesus saith unto him, Thomas, because thou hast seen me, thou hast believed: blessed are they that have not seen, and yet have believed.”

This is where so many get the idea of “blind faith”. However, just a natural reading in context will reveal that Thomas had plenty of evidences – personal testimony from Mary, the apostles and Jesus’ own prophesy.

But this passage goes on to say more in verse 30 and 31 “And many other signs truly did Jesus in the presence of his disciples, which are not written in this book: But these are written, that ye might believe that Jesus is the Christ, the Son of God; and that believing ye might have life through his name.”

Ah, so look at the last part, in other words, he presents these evidences that we may trust that Jesus is the Messiah, God’s Son – so we may have life by believing through his name!

So what is faith? Faith simply means a trust or have confidence in something, in other words holding a thing to be true. It is also justified belief and not just opinion. Faith doesn’t mean there is lack of evidence. Maybe a more accurate word to the Biblical text would be trust.

But I heard otherwise!

However, I have noticed that most Christians believe that faith means something totally different. Unfortunately us Christians, in general, have picked this different meaning from agnostics and atheists. We are told that faith and evidence are antithesis of each other. This view is NOT biblical. For an example of a non-Christian’s thoughts: “Faith is belief without evidence and reason” Now I could see many Christians agreeing. However, it goes onto say “coincidentally that’s also the definition of delusion.” Think about it, the second part does easily follow if the first part is true. So who stated this quote? You guessed it: Richard Dawkins.

You know as much as me this is not biblical. So why do we let atheists define faith for us rather than the Scriptures (1)?

Here some more rhetorical questions to think about. Why do we teach “blind faith”, “faith instead of fact”, “simple faith” and “a leap of faith”? So why do we use slogans and rhetoric like”you should just have simple faith”, or “don’t use man’s reasoning?”

Is Faith opposed to reason and fact?

But there’s more, faith isn’t opposed to “science”, knowledge, reason, logic, understanding, wisdom, etc. Consider this, God is the Creator of the natural world, how could faith be incompatible with God’s creation (some may say “science” or nature)? From God’s nature flows knowledge, reason, logic, wisdom, truth, love, etc. – all compatible but all physically unseen – but all knowable and all have evidence for their existence.

Since from God comes reason and faith, and if faith is in opposition to that, we would have a strange conundrum, right? We are in God’s image, that is why we also have these qualities and should cultivate them. There is no such thing as faith vs. fact. The opposite of faith is faithlessness or lack of trust. The opposites of fact and reason are fiction and unreasonableness!

Oh, by the way, please please be faithful and pass along these facts and reasons to all you interact with!

The Truth Ain’t Enough. Why You Should Inoculate, Not Isolate

Apostle John, A Bishop And A Renegade