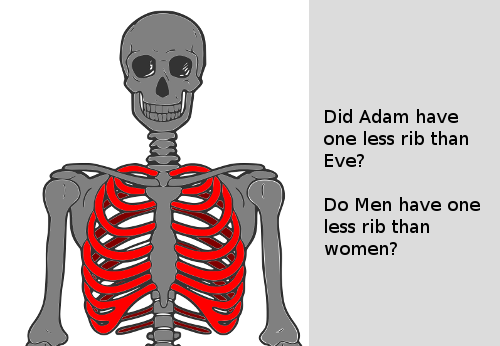 Introduction to Anatomy & Physiology, professor lecturing – I can still picture it even though it was back in the first year of the new millennium. “Men and women on average have 24 ribs” he said. And then he said: “no, men don’t have one less rib”, he want on “that was only Adam.”

First I was kind of surprised he would even bring up a biblical account, many have gotten in trouble talking about anything biblical in a science class, not counting more or less the part of the creation account. However, something else hit me, raising my hand I said “Maybe Adam did have a complete set of ribs, I understand that the rib is the only human bone that can regenerate sections after removal.” “No” he said, “bones don’t grow back, they can heal, but not grow back.”

As the years slid forward, that interaction never left me. A few years later I set out to track down the truth, was I correct? That’s when I ran across an article by Dr. Carl Wieland who told of a previous accident that caused the loss of some of his bone. To replace the missing bones, his surgeon used sections from his ribs – because they regenerate (1)!

As a born and raised thinker and researcher, I went deeper. After searching online, I came across and contacted a few surgeons around the world who seemed to have some knowledge in this area. Over and over I heard the same, yes they use bone from the rib and it regenerates back (2). Even recently researchers also confirmed this same action with rib cartilage (3).

You see, when a surgeon removes the a section of the rib bone they leave a surrounding tissue, called the periosteum, in place. Stem-cells are abundant in this tissue and they regenerate new rib bone.

What are your thoughts? Has an experience like this ever happened to you? Have you been told that men are less a rib compared to women?

(2) Personal email correspondence with a number of surgeons, one was Dr. David Pennington whose name was mentioned in the article that I came across. Also, see this site: http://www.scoliosis.org/resources/medicalupdates/ribthoracoplasty.php

4 thoughts on “FALSE: Adam Did Not have One Less Rib Than Eve”

The First Church of the Navelites