Solution: The Shinkansen Bullet Train and a bird-watching engineer. 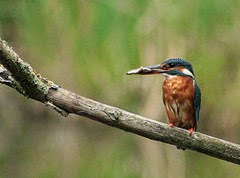 Excessive noise is generated when trains zip too fast, exiting tunnels. Thus a sonic boom. As it moves through a tunnel, pressure builds up in waves which causes this boom as it emerges. A bird-watching Japanese engineer, on the train design team, put his bird watching skills to work. Capturing the design from the kingfisher’s head and beak, he designed the nose of the train.
Kingfishers dart into the water searching for fish – absent a splash and scarcely a ripple. Propelling through a low drag medium to an high drag medium causes shock. Circumventing this issue is accomplished by the exquisitely design of the beak. Now you see the solution for the train with a similar issue – low drag in the tunnel, high drag as it emerged. The wedge design of the kingfisher’s beak was the needed key.
But get this, sound was not the only thing that was reduced, but also a fifteen percent less energy usage and an increase in travel speed by ten percent (1)!
(1) http://www.asknature.org/product/6273d963ef015b98f641fc2b67992a5e
Image source: Flicker Karen Roe

5 Amazing “Alien Technologies” in Life That Strike Down Darwinistic Evolution

Don’t Ever Say You Don’t Believe In Evolution